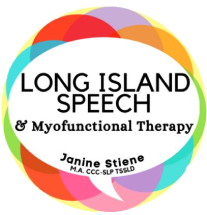 What is a Tongue Thrust? What causes it?

Tongue thrust, is the process of thrusting the tongue forward  and/or sideways against the teeth or in between the teeth while swallowing. A tongue thrust can create lots of orthodontic problems, as well as speech and swallowing difficulties.  Nobody is certain what causes a tongue thrust, but here is a list of some possible causes:

Most of the common speech characteristics that will be distorted with a tongue thrust are : s/z, sh, ch, and r. It is also possible that you will observe a lisp in the child/adults speech. It should be noted that if there is a strong tongue thrust in addition to the speech difficulty, the speech problems will not dissipate without the correction of the tongue thrust.

If you think your child has a tongue thrust don’t worry! At the Long Island Speech Centers we evaluate and treat lots of the symptoms associated with a tongue thrust!

by Suffolk Center for Speech | with 0 Comments
Previous Next