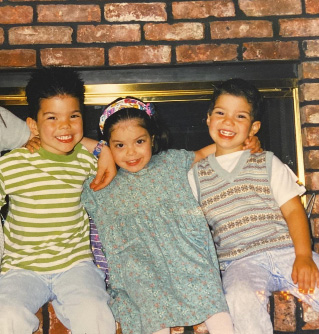 February 8th – The use of a family systems framework in speech and language intervention, is found to be beneficial for school-age children with Autism Spectrum Disorder (ASD), who have similar age siblings. I find a family systems intervention approach interesting because two of my siblings, my older sister and twin brother have ASD. My sister is five years older so we never had the opportunity to be in school at the same time. However, my twin brother, myself, and my brother, who’s one year younger, attended school together. To support my twin’s individual social needs, while also simultaneously building a positive relationship between the sibling triad, it was suggested that my younger brother and I accompany my twin in his speech therapy sessions in elementary school. That’s why I found this intervention approach intriguing because my school adopted the family systems framework to facilitate improvement in my twin’s social interaction with siblings, and eventually people outside the family.

Siblings can be powerful intervention partners due to their long-lasting relationship with the individual with ASD in a variety of settings. Throughout my brother’s speech therapy sessions I was acting as an intervention agent for him. I learned various communication strategies to benefit him when he was displaying difficulty with social interaction or frustration intolerance. I learned to get the most communication and social interaction out of him by choosing mutually enjoyable activities (like riding our bikes outside) and optimizing opportunities for interaction (asking questions, waiting for his response, etc.). From a sibling perspective this intervention approach definitely improved my understanding of my twin’s different abilities, as well as, improved my relationship with him. From a speech-language pathologist perspective, I agree that this intervention approach is important to try to implement throughout intervention as long as each participant wants to and it is a viable option.

by Suffolk Center for Speech | with 0 Comments
Previous Next